I have been following Vir Sanghvi's discussion on the origins and evolution of biryani forthe past two years now (through his column Rude Food in Brunch and his show on television) and have been quite interested in all the opinions and theories he has managed to dig out from all over the country.

It is the theory in many quarters that, the biryani is descended from the Turkish pilaf (pulao) - a mildly spiced dish which is more reliant on the fragrance of the rice itself. The biryani on the other hand, Sanghvi argues, is more in keeping with Indian tastes and has a lot more spice in it. The other theory which some of the culinary experts he spoke to came up with (and one I tend to agree with) is that the difference between pucca biryani and kaccha biryani is actually the difference between pulao and a biryani. Pucca biryani being one where the meat is pre cooked and added to the rice when it is cooking and so essentially a pulao. Whereas a kachha biryani is the real biryani - where the meat is layered with the spice paste and cooked along with partially cooked rice.

The Lucknowi Biryani by this premise then, is basically a pulao - as is probably the one Vir Sanghvi ate in Delhi and came up with the same complaint I have - "The disappointment, however, was the biryani. We found it too dry and utterly lacking in subtlety of flavour." The Hyderabadi biryani, on the other hand, is often touted to be the true biryani since the meat is layered and cooked along with the rice - though going by Vir Sanghvi's experience in that city it seems very difficult to find the real Mc Coy.

But I think after all this research, Sanghvi seems to have reached a veritable mid point on the great biryani debate as evidenced by his latest column last week - which is actually a review of Pratibha Karan's new cookbook called - what else - Biryani! She says that Biryani is an Indian invention and most probably a one pot dish demanded by soldiers on the move - further, she says, it is most probably a South Indian dish.
"If you were to put together all the north Indian biryani recipes, you would end up with about four basic recipes and a few others with minor variations. If you go to the south however, the full richness of biryani dawns on you. It isn’t just the famous Hyderabadi biryanis, it is also the richly spiced biryanis of Kerala, the masaledar Andhra biryani (which is not the same as Hyderabadi biryani, but is a less refined, much earthier dish) and the biryanis of Tamil Nadu.The reason for this is simple enough.

The people of the north are essentially wheat eaters. It is the south that prefers rice and that is why south Indian biryanis frequently go beyond the north Indian obsession with basmati and use more interesting breeds of rice. In fact, wherever there is a community of rice-eaters, the biryani is likely to be more interesting. The biryanis of east Bengal (now Bangladesh) are delicious and unjustly ignored as is the mutton and potato biryani of Calcutta which delights everyone who eats in that city but which is hardly known outside of Bengal."

It gets more interesting with the conclusion that it is not so much the distinction between a biryani and pulao which is important as the many variations that lie between the two - even Sanghvi at this stage abandons the pucca vs kaccha debate! What interests Karan, Sanghvi says, is the regional variations we find in biryanis from all over India and that is what she has explored in her book. I have not seen any of Pratibha Karan's books before (nor have I been paid for this post!), but I am definitely interested in this book on biryanis - and encouraged by Sanghvi's words - "If you are interested in cooking, then this is the perfect book for you because unlike most cookbooks it is not written by a professional cook or a hotel chef. Pratibha does most of her cooking at home and therefore, her recipes are not difficult for the home cook to reproduce."


I guess this means this Coriander Chicken Biryani I made is actually a pulao :). 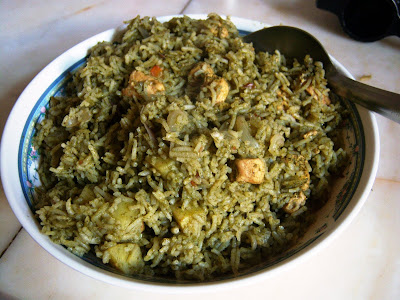 This recipe is very similar to this Brinji.
I didn't cook this in coconut milk though, the chicken was fried with the masala paste (coriander, mint, green chillies, ginger, garlic and whole spices) and then cooked with the rice. Perfect for a Sunday meal made in exactly one hour - served with a onion tomato raita on the side. (Edited to add - please mail me for exact recipes!)
Posted by Miri at 7:09 PM

lovely read. the boriyani has a new twist and I thoroughly like it.

Miri, it is a perfectly reasonable fight. The more I think I know the difference the farther I get from the real deal. My variation of the biryani where the rice(not partially cooked) and meat are cooked together is a whole different variation then.

Bengalis are very touchy about biriyani and can't stomach anything except the Calcutta mutton and chicken biriyani which came to Calcutta with the exiled Nawabhs of Oudh.

Ah, the debate/columns are to be savoured later, but here're my thoughts, unrefined as I've not read the links you provided -

I'm a bit sceptical about each and every town naming a biriyani after itself, has anyone else felt that way? I've seen the Calcutta biriyani and it certainly looked fascinating - white with just a pale piece of potato and some mutton in it - well, I saw parcels being packed and sent out so haven't seen a vat of it. A truly different biryani that I've read of is the 'ancient Tamil' kind that doesn't have any onions or tomatoes in it - I've made something like that and liked it a lot. The next time I made it, I used too much water and there was no difference between that and pongal!

That was an interesting and informative read...
I am craving Biryani now!

I found this post very enlightening. Thank your for the thoroughness.

Ok, I will really have to read this in detail to know the difference. I try to be safe and call most of my rice dishes pulao unless it is layered and all that.

As Knife says Bengalis are very particular about their Biryani and back home we were only familiar with the Luckhnowi Biryani made by some very famous Muslim restaurants. They would be pale and fragrant, each grain of rice glistening separate, with a potato and a large piece of chicken/mutton, not fiery at all.

That is a clear explanation. After moving to US, I ve seen from Sindhi, Mumbai, chettinad, etc....
But only one thing I love biryani with rice layered with meat!
Ur looks different and delicious!