There are some recipes which I learnt from my MIL, like this one here, which are staples in hubby’s extended family – either everyday ones or special ones for close family gatherings (read minimum 50 people!).
Some of them are traditional recipes from her maternal home while others are popular Tamil recipes – not necessarily hoary and traditional, but just ones which are made in many Tamilian homes irrespective of where the family is from. Someone tastes the dish, likes it and asks for the recipe – soon it becomes a favourite in their home. And then before you know it; it’s on your local cookery show on TV!
This recipe is something like that. I hadn’t ever heard of it growing up in Mumbai. But in Chennai I came across many versions of it – and it didn’t matter what community they were from, so I had to assume that this is one of those rootless dishes, so to speak – all the more unique and flavourful for that!
Birinji or Brinji is basically a mixed vegetable pulao, the difference being that it has coconut and spices ground into it and fried; the rice is then cooked in the spice paste and coconut milk which gives it a creamy flavor. Which is why I think of it as a fried rice and not a pulao.
Don’t confuse this with the “Thengai saadam” or Coconut rice which is made down South, no, not the one with grated coconut and tempering made on festival days, but the one which is tempered with whole spices and then cooked in coconut milk. No other masala, no vegetables, nothing else to intrude on the creamy coconut flavor. This one is different.
I tried to figure out the etymology of the name…….but didn’t get very far. Some people say that the name comes from “birinji elai” – the Tamil word used for Tej Patta – a spice similar to Bay leaf used to flavor this dish. But I don’t think that’s correct. If anything I would think that the spice got the name from the dish! Very much a chicken and egg situation….
I did find this reference to birinji though; in a discussion on the etymology of rice and where it originated, the author of the article refers to “birinji” or “brinji” as being the Persian word for rice.
Another article on the Kirghitz tribe in Afghanistan refers to a dish they have called Shier brinji – which is boiled rice in milk.
So I’m assuming that the word we now use for this dish, originally referred to the rice used in the dish – probably a basmati kind of long grained rice which came from the North. If anyone has more interesting or authentic information on this, do let me know!
Whatever the origin, this dish is one surefire way of making an ordinary day a festive occasion. MIL turns this out perfectly each time she has guests over, making it in her electric rice cooker in a largish quantity and it’s always a hit.
I don’t wait for guests to stop by – a Sunday afternoon at home is reason enough to have this delicious dish; some pickle, pachadi, papad and we’re good.
Brinji/Birinji 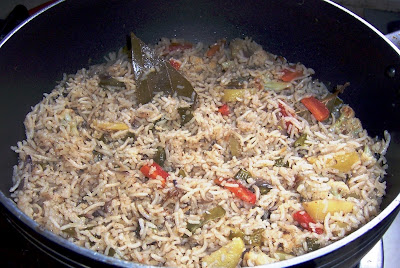 Method
1. Soak the rice in 3 cups of water for about 10 - 1 5 minutes.
2. Grind the ingredients for the spice paste, adding a little water till it is smooth.
3. Heat the oil in a large non stick wok/kadai and add the cloves, cardamom, cinnamon and leaf. 4. Sauté for 1-2 minutes, then add the onions and sauté till lightly browned.
5. Add the spice paste and fry for another 4 – 5 minutes on a low flame, taking care that it doesn’t stick to the bottom
6. Add the mixed chopped vegetables and fry for 2-3 minutes.
7. Drain the rice and reserve the water. Add the rice to the pan and lightly fry for about a minute. Then measure out the coconut milk, add two cups of the reserved rice water, so that the total liquid equals 4 cups and add to the rice in the pan.
8. Add salt to taste – if you taste the liquid at this stage, it should taste a bit salty; it will be then just right after it is cooked.
9. Bring water to a boil and then cover and cook on medium flame for about 5 minutes. Open, stir the rice gently, cover again and cook on a low flame for another 5-7 minutes.
10.If the rice is cooked after this time and there is still a little more water, uncover and cook on low for about a minute or two till the water dries out.

The rice should be just about cooked when you turn off the flame; it shouldn’t be falling apart since it will cook a little bit more in the residual heat and might turn mushy by the time it is served.

Wow I am sure that it will taste great!!Thanx for sharing miri!

that is a very good-looking pulao.

I make something slightly similar called Kuska (on my blog) but this sounds like a lovely variation. I can totally understand how this is always a hit.

Looks, Yum! Thanks for sharing

I know that I will like this dish when I try it.

nice one..I make the same way except I dont' grind them...will try the ground method next time...I always admire the brinji that gets served in weddings..yum it tastes...mine tastes good..but it does not get that signature effect that comes in the served in weddings..

Laavanya - havent heard of Kuska - will check it out!

Srivalli, when cooked in large quantities with lots of oil and masala and loads of veggies, the taste is bound to differ I guess...

Though brinjal is one of my fav veggies, never have tasted it in a biriyani. Yours looks fab. Am sure gonna try it soon

Shella, there is no brinjal in this dish, the name is brinji but just a kind of veggie pulao

I found the recipe for your brinji through Manisha's fb wall and made it the next day. It was awesome though my husband's allergies kicked in because of all the coconut. The upside? More brinji for me! I had a lot of leftover spice paste left that I used to make matter paneer over the weekend. Awesome and he didn't even notice the coconut. :)

Glad you liked it J, maybe next time you could try what we discussed on FB- grinding the spices with the coconut milk itself (or while extracting the coconut milk like I do now). That would reduce the amount of coconut in the recipe and maybe not trigger allergies. Of course you'd have to make more to compensate for your portion loss ;-)

I will definitely try doing that. I had some coconut milk left over after using it for the rice anyways. I used about 3/4 of a can and stored the rest in the refrigerator where it promptly went in the back and two weeks later it was all moldy.
BTW, if you haven't already got the notification on fb, I used the brinji as an inspiration in my food fiction piece and apparently it is a hit with the folks. Thank you.

Oh what a waste, you should have frozen it :(

FN is being annoying bombarding me with unnecessary stuff and not what is actually needed - Im going over now!

Saw this on Jaya's post and came here to check the recipe Miri. This one with coconut paste and coconut milk sounds exotic and crowd pleasing. Will keep this in mind when we have guests the next time.