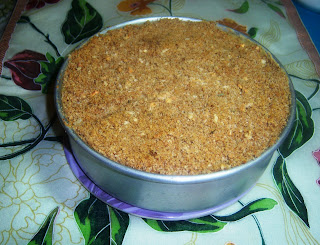 I have Vaishali of Earthvegan to thank for this dish and her first food blog event - Its a Vegan World. She is one of my favourite bloggers and I love how she does so many interesting things with recipes. Of course, we all know how much she loves her bananas ;)! But seriously, though I am not a vegan, I have learnt a lot about how one can adapt recipes without losing any of the flavours.
So, while trying to think of something to make for her event which was not a pasta based dish (the theme is Italian this time), I really racked my brains and pushed myself to come up with something as original as she might have thought up. AND I promised myself not to take the easy way and peek into her blog .....

A tall order indeed then - to make an Italian dish which was vegan and not pasta based. I finally remembered that I make a pretty decent Italian aubergine bake (which turns out a bit like this recipe) and if I did away with the milk, parmesan cheese and the egg white I usually added - I could adapt it quite well to suit the vegan theme. Once I started thinking on those lines, I decided to add some tofu with the aubergines and to substitute the parmesan cheese with a soy milk based white sauce. 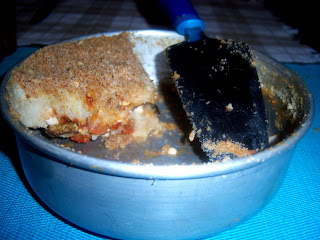 The funny part is that as I adapted and improvised the recipe it almost resembled a vegan moussaka! Well, call it what you want but it sure tasted delicious and made a great one dish meal for us. The bread crumb crust was crisp and golden while the tofu bits combined with the creamy mashed potatoes and the crispy aubergines made for an interesting texture. Sending this to Vaishali's first event - Its a Vegan World - Italian. 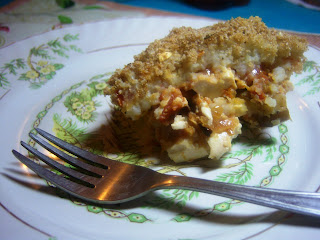 Aubergine & Tofu Bake
Aubergines
1 (bharta type) round aubergine - medium, sliced in 1/4" thick slices and sprinkled with salt and set aside for about 30 minutes. (the aubergine slices may look too much in the beginning, but will shrink after roasting)
1 tsp dried thyme
1 tsp freshly crushed black pepper
2 tbsp olive oil

Potato
3 medium potatoes cooked in a pressure cooker till soft, peeled and mashed along with the ingredients below:
salt to taste
crushed black pepper
1 tsp olive oil
1/4 cup soy milk

Breadcrumbs
1 cup bread crumbs (I usually toast leftover bread, powder it and store in the fridge)
1 tsp dried thyme
salt to taste
minced garlic clove-1
Mix together and keep aside.

1. Arrange the salted aubergine slices (after draining any liquid) on a baking tray, sprinkle with the dried thyme and pepper and roast in a pre heated oven at 200C for about 15- minutes
2. Heat 1 tsp olive oil in a pan, add the minced garlic and finely chopped onion and saute 10 minutes.
3. Put in the cumin powder, red chilli powder, tomatoes and salt and fry for another 5 minutes till the tomatoes turn mushy. Add the crumbled tofu (not the sliced one), basil leaves and salt and remove after another 3 minutes.
4. Pre heat the oven to 180C, grease a deep 8"oven proof dish and arrange half of the aubergine and tofu slices on the bottom and top with half the tofu tomato mixture and then half of the mashed potato mixture.
Repeat - aubergine & tofu slices,
- tofu tomato mixture
- mashed potatoes.
5. Make the white sauce, by frying the flour on a low flame in 2 tsp of olive oil till it loses its rawness but doesn't burn. Add the soy milk a little at a time and then whisk over a flame till there are no lumps and the sauce thickens and is smooth. (about 7 minutes)
6. Pour the sauce over the pre arranged layers in the oven dish and then cover with the seasoned bread crumbs.
7. Bake the casserole for 30 minutes at 180C till the breadcrumbs are golden. Remove, slice carefully and serve warm. 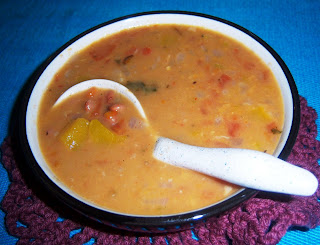 Rajma or kidney beans seem to evoke quite a lot of emotions in people. There are people who absolutely love them and there are others who just hate anything which has kidney beans in it. I personally love rajma chawal and so does hubby, though it wasn't part of our diet till about 15 years ago.
I started having rajma on a regular basis when I was sharing a flat with four other girls. One of them was a Punjabi and she made the most amazing dals EVER! I used to have a whole bowl of it even before dinner! Anyway, C used to cook up a huge amount of rajma every Sunday and the four of us would sit down together - hair oiled, MTV blaring in the background and as we chatted about work, boyfriends and everything else in our lives we slurped up the rajma chawal savouring every single mouthful.

It was a matter of time before I discovered Tex Mex food and the joys of having refried beans with "Mexican" rice ;). And then of course there was that childhood favourite - baked beans on toast!

So, as you can see - beans in soup was a welcome addition and according to me makes the soup so much more than just an appetizer. Its practically a meal in a bowl.

This soup is so warm and comforting, it is guaranteed to satisfy the most picky palate. Beans, pumpkin and tomato - what's not to love?! I found it perfect for one evening last week, when the temperature suddenly dipped after rising to an unseasonal high the previous few days. I prefer not pureeing even part of the soup, the chunky texture really suits this soup and adds to the taste. But if you have kids who might fuss, it might make sense to puree some of it and keep a only a little of the chunky bits in for them. 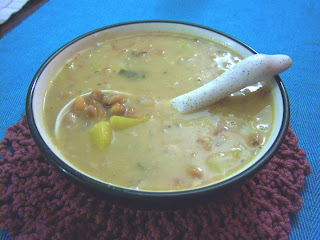 Method:
1. Heat oil and put in the bay leaf and garlic, then add the chopped onion after a couple of minutes and saute until transluscent.
2. Add the chopped tomatoes, chilli powder and cumin powder and saute for another 5 minutes till mushy.
3. Put in the cooked beans and chopped pumpkin and potatoes and fry5 minutes.
4. Pour the stock in along with 1.5 cups of the beans stock and a little salt and bring to boil. Reduce flame and simmer for atleast 15-20 minutes till the pumpkin and potatoes are cooked and the soup thickens.
5. Adjust seasoning, add the crushed pepper and remove from flame. Serve warm.
Posted by Miri at 10:43 PM 7 comments: 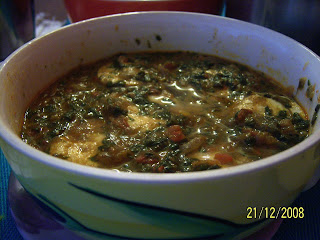 So many years ago as a new bride, I got 6 foreign magazines a month from the neighbourhood circulating library. One of them was Good Food - a BBC magazine which had some really good recipes and some nice articles on food. I remember trying many of them - especially the one pot ones which suited me when I was learning to balance work and home. Then of course, there were the absolutely amazing pictures to drool over.

Over the years though, I have shifted to looking for recipes online on it's website and it's very convenient to search by ingredients or look for a particular dish. I was very happy then, to find the Good Food "101 Healthy Eats" cookbook. A really good selection of recipes - simple, healthy and delicious. I am definitely going to cook my way through this book!

I love egg curry in any form and am constantly trying out new recipes. So no surprise then, that the first recipe I tried from this book was an egg curry. I was quite intrigued actually, the recipe was quite different from the usual - it had spinach and cherry tomatoes to start with and then was finished with coconut milk. Seemed like an interesting combination and I wasn't disappointed. The curry was smooth and creamy but not heavy and the spinach added a very nice texture to the whole dish. 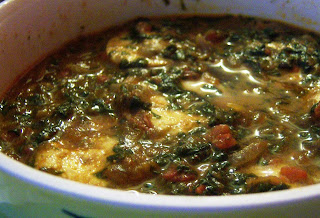 Method:
1. Boil the eggs for about 8 minutes, drain, cool and peel. keep aside.
2. Heat the oil in a wide pan and add the onions, saute for 5 minutes till soft.
3. Add the chilli powder, turmeric powder, coriander powder and cumin powder and saute 2 minutes.
4. Add the chopped spinach and fry for 5 minutes till it softens. Add the tomatoes and the coconut milk and simmer gently for another 5 minutes.
5. Slice the eggs into half and add the curry, season with salt, gently heat through and remove from flame.
Posted by Miri at 10:02 AM 11 comments: 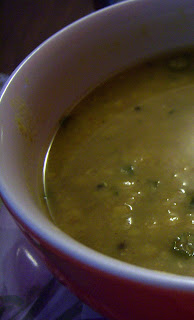 Another version of one of my favourite dishes - I have waxed eloquent on the joys of simple, Maharashtrian home cooking and for those who wonder what all the fuss is about, do try this once. Amti, in all its lentil cloaked goodness is at once comforting and delicious. Maybe it's my sambar craving South Indian roots, maybe its my Mumbai upbringing eating varan bhath at my neighbour's house - whatever it is - I loove amti!

Ruchira - the cookbook, as I have mentioned in this post, is very inspiring to the cook who has experimented and just wants to come back to some good 'ol home cooking! So, I had to try this version of amti when I picked up the book - and I wasn't disappointed.

The flavours were absolutely amazing - simple, clean yet carrying that indescribable aroma of goda masala mixed with tamarind. Perfect with some hot polis or even just rice and bhindi bhaji (okra stir fry). Goda masala is usually home made in Maharashtrian households but Bedekar and some other local brands in Mumbai make a decent mix too.

This dish goes to this month's edition of Monthly Mingle - Healthy Family Dinners - being hosted by Michelle of What's Cooking. Monthly Mingle is originally the brainchild of Meeta of the amazing blog What's for Lunch Honey.

adapted from Ruchira by Kamlabai Ogale

1. Cook the dal in plenty of water in a pressure cooker till soft. Whisk the dal a bit.
2. Heat the oil in a pan and add the mustard, when they splutter add the green chilli, curry leaves, asafoetida and turmeric powder.
3. Add the cooked dal, the jaggery, salt, goda masala and the tamarind juice. Bring to a boil and reduce flame and simmer for 10 minutes.
4. Add the grated coconut and coriander leaves and remove from flame.