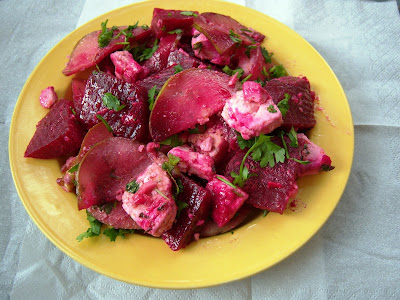 This is a gorgeous salad and a must try. Even my Dad who is a little conservative in his tastes (as he ages, else it was he who was the ultimate foodie when I was growing up!!) loved it and had second and third helpings. I initially made this for this dinner with friends and served it with a Lamb Chilli and Spaghetti Aglio - E Olio, but it is so simple that this can be a quick addition for an everyday meal with just pasta or even grilled chicken or fish.

The original idea comes from Feast on Cheap which has the beets roasted in her version while I pressure cooked them. Indian beets must be different because they just didn't cook in the oven after all that time. Pressure cooking was way simpler. Also, the orange balsamic reduction is from another recipe of hers but I liked it so much I incorporated it into this one. I omitted the onions/shallots in the original recipe because Indian onions are quite pungent. Be sure to mix the pears and the beets only when ready to serve because otherwise the pears will turn blood red - my pic was taken after 15 minutes and its already red.

The sweet flavours of the beet and the pear are interpersed with a sharp tartness from the balsamic vinaigrette and heightened by the salty feta - my favourite!. Such a beautiful combination of flavours!! 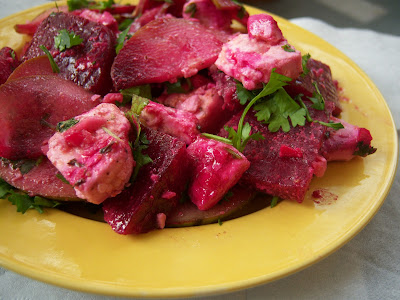 
1.  Put the beets into a vessel or directly in a pressure cooker, with a little water and cook for one whistle (8-10 minutes)
2. Meanwhile,  heat the balsamic vinegar and orange juice together on a medium flame till it reduces to half (about 4-5 minutes), stirring occasionally.
3. Whisk in all the other ingredients of the dressing along with the orange juice reduction and keep aside to allow the flavours to meld.
4. Once the pressure cooker can be opened and the beets have cooled, peel them, cut the ends and then cut into 1" cubes or thinner (I did thinner slices). Place in the salad bowl you will be serving them in.
5.Cut the pears into very thin slices. Crumble the feta cheese.
6. Add the toasted walnuts, feta cheese, and pears to the beets and toss with the dressing till well mixed. Garnish with chopped coriander. Serve immediately.
7. To make ahead and serve later, toss the beets in 1/2 the dressing and refrigerate covered. In another bowl. In another bowl, add the feta, pears and walnuts and rerigerate covered. Just before serving, add the pears, walnuts and feta to the beet bow, toss with the remaining dressing and garnish with chopped coriander. 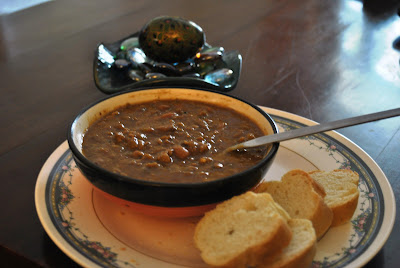 Chili Con Carne - the classic stew with Mexican origins but now known more as a part of Tex-Mex cuisine - has long fascinated me. The flavours of the various chillies that are used in it and the method of slow cooking the meat in a rich gravy always made me wonder how it would taste. I still don't know what the real deal is - BUT I can say that I have made my own version of it and it was much appreciated!


There were a couple of substitutions involved of course - not having access to the different kind of peppers or spice powders - habanero, poblano, chipotle etc - I had to come up with a spice mix of my own which I did after consulting a few recipes for chili spice mixes, online. I also substituted beef mince with goat's meat mince - what we call mutton in India. And instead of a crockpot, I simmered it for a couple of hours in my rice cooker.

I served it with some French bread and Spaghetti Aglio e Olio and by the end of the dinner with friends, there wasn't much left over. There's something about a slow cooked stew which has had time for the flavours to come together (I made it the previous day) which makes for a great meal - especially one shared with dear friends. 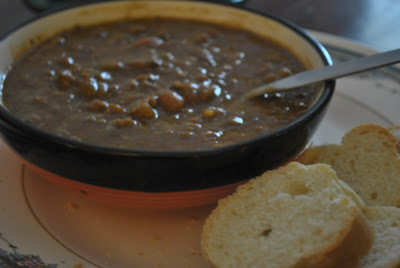 Roast and grind to a fine powder and mix with

Run through the blender one more time

1. Heat 2 tbsp of olive oil in a pressure pan or pressure cooker and saute the mince in it for about 8-10 minutes till browned. Remove and keep aside.
2. In the same pan, heat 1 tbsp of oil and saute the onions and the bell peppers for 3 minutes, then add the garlic, chili powder, cumin powder, chili spice mix and saute for a couple of minutes more. Add the tomatoes and pumpkin pieces and saute for 3 minutes till soft.
3. Add the beef stock and salt and bring to a boil, close the pressure pan and cook for 2 whistles on high and then lower flame and cook for 5 minutes.
4. When cool enough, release pressure, open cooker and add the cooked kidney beans - mash about half a cup of the cooked kidney beans. Check seasoning and pour into a rice cooker.
5. Switch on the rice cooker and making sure there is enough liquid, cook for 90 minutes to 2 hours till the stew reduces to a thick consistency.  Stir occasionally and check for the seasoning adding cumin powder or spice powder or chili powder depending on the overall taste. (Alternatively, you can cook the dish on the stove top in a heavy bottomed vessel for about an hour)
6. Serve (preferably after keeping overnight in the fridge) with coarse bread or rice. (I served it with Spaghetti Aglio e Olio - a simple spaghetti dish tossed with olive oil, garlic and chilli flakes garnished with cheese - I also added some bacon)
Posted by Miri at 11:17 PM 8 comments:

Some shots from my trip in January this year to the Satpura jungles in Madhya Pradesh - I had gone along with two other girlfriends to a jungle lodge which one of them is a partner in. We helped revamp their menu and train the kitchen staff who have been hired locally.  I had posted one of those recipes here for Patrani Machhi or Fish steamed in Banana Leaves. 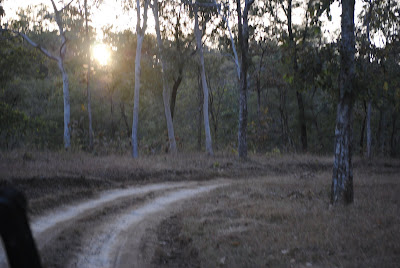 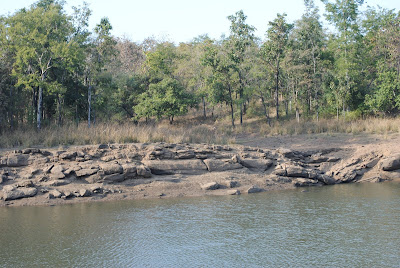 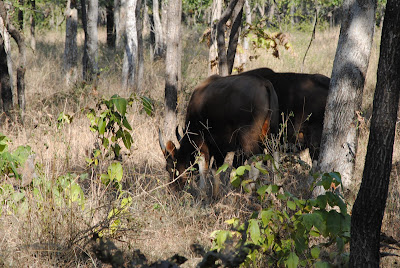 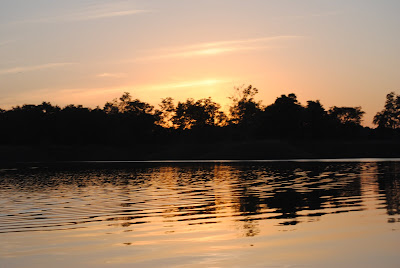 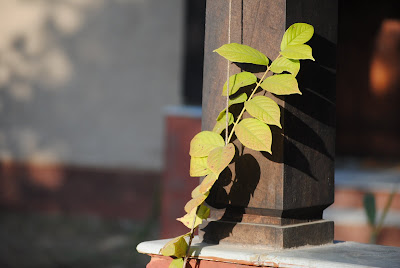 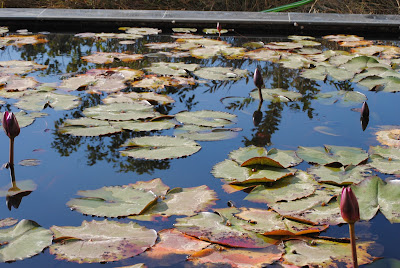 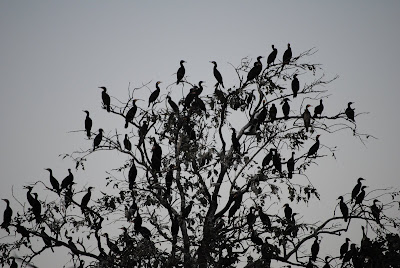 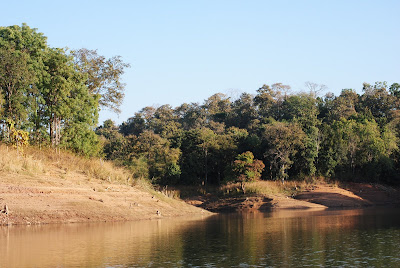 Thank you for all your wishes on completing 4 years - couldn't have done it without your support and encouragement!

I entered the serial numbers of the participants in the Giveaway into a random number generator (www.random.org) and the number that was generated was of Sarah! Congratulations Sarah!!! I will mail you shortly for your address details - looking forward to sending you the Mainland China Cookbook - hope you enjoy cooking from it.(edited to add: I forgot you are from Ireland, so you will be getting Anjum Anand's new book - I Love Curry)
Posted by Miri at 10:59 PM 12 comments:

Email ThisBlogThis!Share to TwitterShare to FacebookShare to Pinterest
Labels: musings 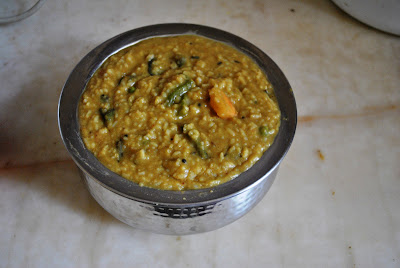 I was introduced to this beautiful dish in MIL's home - she had learnt it while living in Bangalore when FIL was posted there in the 70s. This is a dish from Karnataka and she explained to me that Bisibele Huli Anna in Kannada literally meant -" piping hot lentils, tamarind and rice". Hubby loves this one pot meal and MIL is an expert at turning this out in the rice cooker at short notice for guests, for a meal which receives a lot of praise.

There is an interesting anecdote I have regarding this dish. In the early days of our marriage, sometimes when I was tired at the end of a long day I would ask hubby as to what he would like to eat he would say "why don't you just cook Bisibele Bhath"? It puzzled me why someone who was usually looking to save me from spending too much time in the kitchen, suddenly asking me to make something which is a lot more work than normal. I figured out after a long time that he thought that Bisibele Bhath was just sambar and rice cooked together - which was of course much easier wasn't it? sorta like making khichdi?!! I had to explaint to him that it was much more complicated than that and actually involved grinding a spice mix from scratch.

Talking about the spice mix - I disagreed a lot with MIL about the spice mix she uses and finally after doing a bit of research and cooking the dish a few times, came to a mix of spices which I feel is the best tasting for this dish. I basically don't like it too heavy on the whole spices like cinnamon and cloves and tone them down taking care not to tone it down so much that the dish tastes bland - it has lentils and rice after all as the main ingredients, so don't want it becoming just a plain khichdi. I'm also particular about the vegetables I use and don't agree with MIL's tendency to put in whatever's at hand - including bottle gourd (dudhi/lauki) and wax gourd (parwal) sometimes! I tend to stick to carrots, beans, peas and potatoes. I know - shocking for someone who otherwise substitutes with such ease!

What my MIL excels at is the exact ratio of lentils, rice, tamarind and spice mix - it took me sometime to get that right so as to not end up with a stodgy dish or worse, one that had too much tamarind or was too spicy. I now realise that its quite easy to make it as long as one breaks it down to its components - the dal and rice cook together and then cooked again with the spices, tamarind juice and vegetables till it all melds into a beautiful symphony of flavours and a delicious one pot meal.

We had this for Sunday lunch along with these Crispy Potatoes or Urulai Roast - another speciality of MIL's.  We were joined by our neighbours from upstairs for lunch that day so the company made it an even nicer meal.

Just a reminder that I have a Giveaway on my blog and its the last couple of days to participate - so hurry over and leave a comment to win a beautiful cookbook! 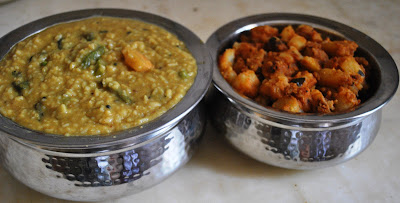 1. Cook the rice and lentils together with the turmeric, in a pressure cooker - use a little more water than usual so they are cooked well and a little mushy.
2. Meanwhile roast all the ingredients for the spice mix, except the coconut, in a tsp of oil and then add the grated coconut at the end and roast for 2 minutes more. Cool and grind to a fine paste.
3. Extract the tamarind juice and keep aside.
4. In a heavy bottomed pan, add the ghee and oil and when hot, add the tempering ingredients. When the mustard pops, add the spice mix and vegetables and fry.
5. Sprinkle some water and cover and cook till the vegetables are par boiled.
6. Then add the cooked rice and lentils, one cup of water as well as the tamarind juice and salt and bring to a boil. Lower flame and simmer for about 10-12 minutes till well blended but still runny and not dry. Add some more water if needed.
7. Serve hot with a drizzle of ghee on top. Garnish with coriander leaves.
Posted by Miri at 8:03 PM 5 comments: