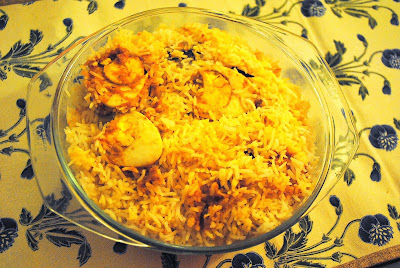 Yes, here we go again on this blog - waxing poetic about Biryani. This time for a dish which some may call a pretender. If a chicken biryani is looked down as compared to the real deal of a mutton biryani - imagine the status of an egg biryani. NO meat at all? scoff the purists......However, I have eaten some excellent egg biryanis in Tamil Nadu - the fact that I love boiled eggs may have something to do with it!
The egg biryani in the small joints in Chennai are usually the same as the chicken biryani - the biryani often ladled from the same vessel with the chicken pieces replaced with boiled eggs. But an egg biryani made at home can taste very delicious and is an easy alternative to mutton or chicken if you don't have all the ingredients (or don't cook meat at home). 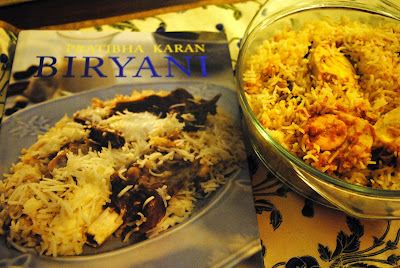 So, when I was looking through Pratibha Karan's book "Biryani" which I recently bought (delayed flights and an airport bookshop are not a good combination for my wallet!), this was the first recipe which I wanted to try. Yes - I know, sounds funny when you think of the several other recipes from all over India included in this book. But I have a weakness for egg biryani.

This recipe is very different from the fiery, red concoction one gets to see at places like Hameedia or Deluxe in Chennai. It is delicately spiced and the flavour seeps into the rice and egg quite beautifully, when cooked on dum. In fact it tasted excellent the next day in my lunch box, when the flavours had even more time  to meld.
The book is a nice one to have in your collection, if you like biryanis and would be willing to try different recipes. I usually don't like cookbooks which are limited to one category - but this one has so much variety from all over the country,it. I know, I probably won't ever make the Bater (Quail) Biryani or even so many of the mutton biryanis, but the novelty of recipes like Seviyon ki Biryani (vermicelli and mutton), fish and prawn biryanis from Kerala, Kairi Biryani (raw mango and mutton) as well as the fact that the book has recipes like Ambur Biryani and Salem Biryani - two very regional specialities from Tamil Nadu - will definitely keep me coming back. The recipes for raitas are a good selection - smoked onion and tomato raita and eggplant raita are definitely going to be on the menu.
Some of the recipes seem a little disconnected from the others though (Kampur Biryani and Arroz Con Pollo), but I guess there will be a few recipes in a book like this, that one doesn't relate to. The vegetarian recipes are interesting and include jackfruit biryani and qabooli. On the whole a very well researched and comprehensive biryani cookbook. 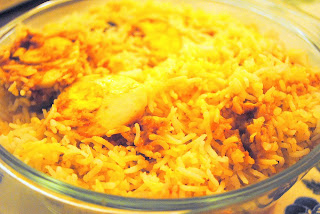 
Wash and soak the rice for 15 minutes, then drain. Cook the rice in the water with all the whole spices and salt - the water should taste a little saltier than necessary for the taste to be just right after it is cooked.
The rice should be just cooked and the grains should be separate. Keep aside.

Heat the oil in a non stick pan and fry the eggs lightly; sprinkle the salt and garam masala over the eggs while frying them. Keep aside.

4-5 tomatoes,blanched in hot water and then peeled and pureed along with:
Ginger - 1"
Garlic - 5 cloves
Green chillies - 4-5
2 tbsp oil and 1 tbsp ghee
salt to taste


2 onions sliced thinly and fried in 2-3 tbsp oil till golden brown. Keep aside.

Take a heavy bottomed pan with a tight fitting lid.
Heat the ghee and oil and fry the tomato spice paste for 5 minutes, along with the salt, till the oil separates.
Pour out the mixture over the lightly fried eggs and mix gently.

In the same heavy bottomed pan, smear a tsp of oil. Spread half of the cooked rice.
Top with the tomato egg mixture and cover with the remaining cooked rice. Sprinkle about 1/3 cup water and one tbsp ghee. Cover with a tight fitting lid and cook for about 5 minutes till the layers are all hot.

Serve hot garnished with the fried onions. A raita made with grated cucumber or bottle gourd (ghia/dudhi) makes a good accompaniment.

Have got to try!

Yeah, this is a really good book - I did the selfless thing and gifted it to a friend, I had to buy it somehow, for myself or others! :)

I have PK's Hyd Cuisine book - stayed away for years, hoped for a paperback, finally gave in after several years.

Egg Biryani is one of my fav dishes.

Have a great New Year Miri.

That Biryani looks awesome. Hve to try it soon.

This makes me so very hungry.