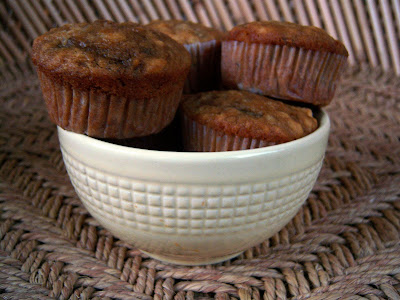 These are delicious muffins full of flavour with a rich fruity flavour - one of those amazing treats you can find on Meeta's blog - What's for Lunch Honey!

She calls them Muffins Exotica - and exotic they are indeed, it has banana, pineapple and coconut and for good measure I added some honey as well! The kids who had come over for a playdate with my daughter wolfed them down in no time . I also replaced 1/2 a cup of flour with wheat flour (atta) and it made a good snack to take to work.
Posted by Miri at 10:57 AM 4 comments: 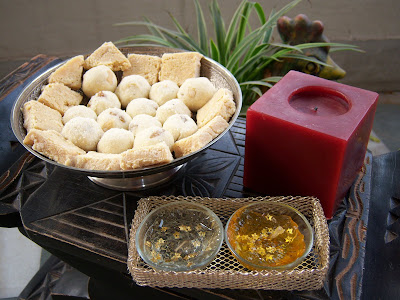 The festive season started early this year and it seems like we hardly celebrated Dasera and its already Diwali. Life's been a whirlwind this past month - we had friends from Chennai staying with us during the Dasera holidays. The next weekend saw us making a quick dash to Mumbai - in the space of 2 days we caught up with my brother's family, surprised my best friend, met a dear friend who had come down from Oz for the holidays and had a reunion with my CA gang! No wonder then Diwali practically crept up on me and gave me a big surprise.

Its my third Diwali this year, in Delhi, and I am already complaining how its not "cool enough"! I have also become a veteran at shopping for gifts (something we never did in Mumbai and Chennai) at the Diwali melas. Launched an assault on the most popular one (Blind School Mela) at 10 30 in the morning when it was still empty and was done by 12.30!! 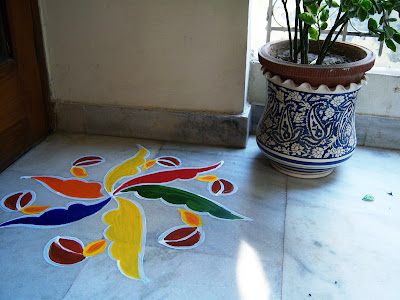 The festive mood crept in only a couple of days back - that too it had to be kick started into full gear by wearing a saree to work in the morning the day before Dhanteras! So when I came back after battling shopping traffic on the way home, I was surprised to find myself in the mood to make some sweets. So, after putting my daughter to bed and in the midst of dinner, I made my favourite first - rava laddoos. There's something about a well made rava laddoo - soft ball of sweet powdery goodness - which never fails to satisfy me. I don't like the moong dal laddoos and besan laddoos as much.

Then when they were done, my mind went back to the conversation I had with my cousin on the way back home - she told me about a sweet she was making this year. It's called 7 cup barfi apparently, because it has 7 cups of ingredients - all the same measure. I was quite intrigued by it since I hadn't heard of such a sweet before. I usually make mysore pak so I decided to try this one instead. Was too late to call her, but the measures she told me had stuck in my head so I made it on that basis. 1 cup ghee, 1 cup gram flour, 1 cup coconut, 1 cup milk and 3 cups sugar (I used 2.5 cups and it was still quite sweet).

This is a good barfi to try as a beginner - I should have started with this instead of the mysore pak I tried the first time itself....the ingredients are all supposed to be mixed together and then cooked down to the barfi stage. I decided to roast the gram flour before mixing though, just to be on the safer side.
Make sure you add the other ingredients only after you mix the gram flour with the milk completely, till well blended and smooth without any lumps. The cooking takes about 30 minutes on a medium flame stirring constantly. The mixture will come together and leave the sides of the pan and become very thick. When scooped with a spatula or spoon it will not drop easily from it. Put of the flame at this stage and stir a few secs more before pouring into a greased tray.

For those who fear the whole "mithai/bakshanam" making process - try these recipes. They are simple and took me just an hour to make both. BUT if you, like me, are a miserly user of ghee and sugar, be warned that I disconnected that part of my brain and went ahead and used a whole cup of ghee in each of these recipes. Past experience has shown that rock hard roundels and squares are not what you want on Diwali!

Wishing you a very Happy Diwali!! 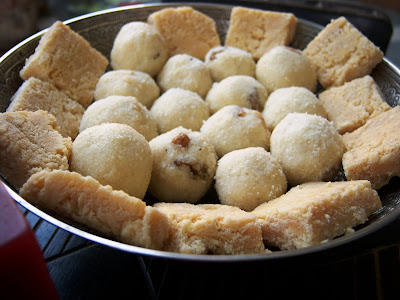 1. Add 2 tsp of the ghee to a heavy pan and lightly fry the cashews ansd raisins for about 3 minutes - the raisins will plump up and the cashews will turn light brown. Remove and keep aside.
2. Add 2 more tsp of ghee to the pan and lightly fry the rava for about 5 minutes on a low flame, constantly stirring. A light aroma of roasted rava is enough and it shouldn't turn brown.
3. Transfer the rava to a plate where it can cool.
4. Remove the cardamom seeds and mix it with the sugar and grind in a mixie till almost powdered.
5. Add the cooled rava to the mixie and grind till the sugar is completely powdered and the rava is still a little bit coarse.
6. Remove from the mixie into a separate dish.
7. Take a large plate - take about one third of the rava and add the warm, melted ghee in tablespoons to the rava - roughly a little less than half a cup should do. You can always add some more later if needed.
8. Take about 2 raisins and half a cashew for each laddoo and combine it with the rava and melted ghee and make small balls. If the mixture has too much of ghee, add a bit of the rava sugar mixture.
9. Once this is done, repeat with another one third of the rava and another measure of ghee and then again with the last portion of rava and some more ghee.

Don't panic if the laddoos are not formed well, just add a wee bit of warm ghee and it should come together.

1. Roast the gram flour in a tsp of ghee for 3-4 minutes and cool. Mix into the milk till well blended and without lumps.
2. Mix the rest of the ingredients with the milk and besan, transfer to a heavy bottomed pan and cook on a medium flame.
3. After approximately 20 minutes, the mixture will start leaving the sides and become quite porous and semi solid. When scooped up with the spatula, it will not drop easily - at this stage when it starts coming together, remove from flame and pour into a greased tray and flatten with the back of a greased cup.
4. Cut into diamond or square shapes after a few minutes and let cool completely.

A quick search on the net told me that this is quite a popular sweet with many variations for the ingredients of the 7 cups! Take your pick and sweeten up your Diwali celebrations! 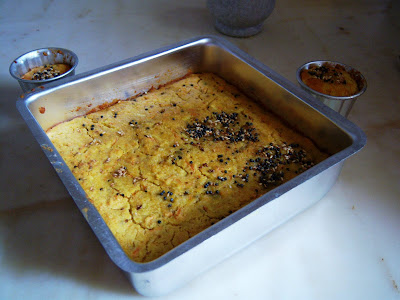 I love to cook from scratch - there I said it. In this world of convenience food and TV dinners, it may seem like a complete waste of time to do things from scratch, but I have to admit I like the whole process of shopping for the ingredients, getting them together and then creating something out of it.

I would be the first one to protest against spending a minute more than necessary in the kitchen on a daily basis. But as someone who loves cooking, there are times when you are in the kitchen by choice rather than by compulsion. Those are the times when I love to experiment and try new things, sample new flavours and play around with textures and tastes.

So, though I have made this "instant" handvo a lot of times and love the fact that it's so easy to rustle up a tasty breakfast, I always wanted to make the handvo from the traditional mix of whole grain flours. Well, thanks to my dear friend Arch, who has the delightful blog The Yum Factor, I got a goodish amount of the flour used to make handvo - straight from Ahmedabad. Her poor hubby was made to cart the flour along with drumsticks and fresh sweetcorn - the things we foodies do!! Hopefully the evening spent with us made up for the courier service :)

The handvo made this way is markedly different from the instant version, not to mention that it is that much more healthy because of the whole grain flour used. I added grated bottlegourd (dudhi/ghiya) and carrots as well as some of the fabulous sweet corn. I baked some of the batter (without the green chilli paste) in muffin tins, to send in my daughter's lunch box and she loved it! And the fact that it is baked makes it a must-have on my list atleast!

I followed the recipe from Arch and it turned out beautifully! Cut into squares and served with green chutney. 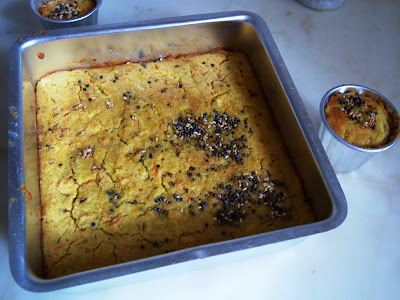