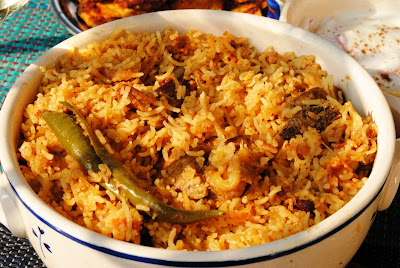 As you can see, I am on a roll here - two biryanis in two months is unparalleled in this household! The closest I have come to ODing on biryanis is when I was working in Chennai - my boss was a biryani freak and would eat biryanis almost every day - though I would carry lunch from home, just seeing that biryani almost everyday was enough!!
But its much better to try out biryani recipes in winter when your body craves  carbs and fat, rather than in summer when all you want to do is lie about and drink nimboo paani (lime juice) by the gallon. I had already decided on the weekend, that I wanted to eat biryani as soon as I got home. This was prompted by a rather lacklustre biryani I had on my trip (which was more than made up for by the unplanned company of Vir Das at that dinner - what an intelligent, humurous person he is!).

So, on Republic Day, after a nice home made breakfast of idli and sambar (with my favourite combination of broad beans, drumstick and pumpkin), I pulled out Pratibha Karan's Biryani -which I have written about before.  While watching the Republic Day parade on TV and and playing Uno with my daughter (have you tried this? its a little addictive - especially for the young 'uns when they realise they can beat the adults!) , I flipped through the pages trying to decide on a biryani (yes, the combination of woman plus Gemini is just made for multi tasking!) for the afternoon. I had just ordered the mutton at 11am, so I couldn't use a recipe which called for 3 plus hours of marination. At the same time, we do like our meat to be cooked well and soaked through with the spices.

I saw an impressive Hyderabadi Gosht Biryani - but it needed chironji (nutty seeds) which I didn't have. The other Gosht biryani needed marination. Flipping through the book and by elimination, I finally reached the Southern section - the Ambur biryani called to me since I have passed through this town a few times and hubby would sing paens to the biryani which originated here. But it seemed too reliant on ready made spice powders - maybe on a day when I am in a hurry.

The recipe on the previous page was for Salem Biryani and it seemed perfect - no marination but the meat is cooked in water separately before adding the spices and then cooked again before adding the rice. It also had an easy spice paste made of poppy seeds (khus khus), onions,ginger and garlic.

Karan describes this biryani as one which is credited to have originated in the town of Salem in Tamil Nadu. Meat based dishes outside of home, as she says, were usually available in "Military Hotels" - a nomenclature which described places serving non vegetarian food and which arose supposedly from eating establishments which catered to soldiers. In a time when eating out was not that widespread, soldiers were a new clientile and were bracketed as meat eaters or atleast not pure vegetarians. This dish was probably invented in one of these military hotels in Salem.

I am not posting the whole recipe since I pretty much stuck to it for the most part and wouldn't be fair to reproduce it word for word. Do email me at peppercornmill AT gmail DOT com if you want the recipe and I will be happy to share.

Bacially after cooking the meat in some turmeric water, it is cooked again with sliced browned onions,  the poppy paste ginger garlic paste, tomatoes, green chillies and a mix of yoghurt and spice powders. The rice is then fried in a little ghee separately and layered over the meat and then cooked together till done. It was a beautiful winter afternoon and we opted to sit out and eat in our balcony - a glass of wine, pan fried eggplant slices, mutton biryani and an onion raita - the perfect Sunday meal. 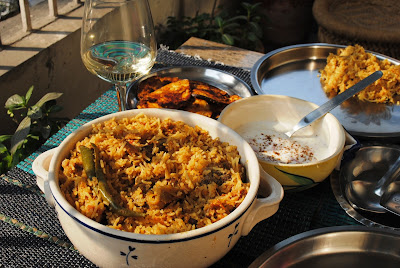 It looks absolutely divine Miri! the perfect Sunday lunch. Being an ardent biriyani fan but never been able to make the perfect no-slave biriyani yet!:) hope this will end my quest:) can you please share the recipie with me? Much obliged.Cheers Miri.

Thank you Sarah - I will definitely mail you the recipe. :)

Miri, you have made me crave now. I have to wait till the weekend since biryani making needs time :) I would be glad to try a biryani recipe from practically my (former) backyard.

Sorry to nitpick but Salem is not all that deep south, south of Cheenai maybe but compared to Nagercoil or Kanyakumari Salem is pretty north and very close to the Karnataka border.

I am big Biryani fan and any kind of Biryani entices me. Looks absolutely mouthwatering.

When I had ppl over for dinner recently, we got the biriyani from an Ambur biriyani place. I don't think I've come across a Salem biriyani, though!

Looks like a perfect meal...Enjoy the weather before the summer hits ! I have had ambur biryani in Chennai, was yum...this looks great too...Tried your egg biryani the other day, was so simple and so tasty..great recipe..

Indo - you're right - I have corrected that....thanks and hope you try this out soon!

Thanks so much for the recipie Miri! I made this yesterday and it was yum. The very first time that my biriyani came out absolutely perfect! this is a keeper..thanks so much.