I spent a week at my parent's place last month and enjoyed some real good home cookin'. One of the breakfasts was adai and I realised that somewhere along the way I had tweaked Mom's recipe so much that it didn't resemble the original too much!

Now, reinvention isn't a bad thing, but it was great to taste the original which was much more crisp and spicy and tasted soo much better - the slathering of white butter (see pic) 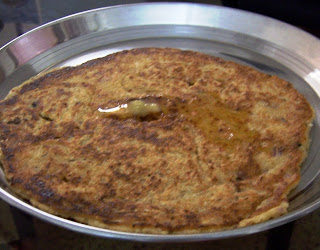 and chunks of jaggery helped of course, items we don't see much of, at our place.
To be fair, my parents stay away ffrom these too due to health reasons, but I think they see our visits as a legitimate excuse to sneak these banned items into the house!
Anyway, once I was back, I decided to go back to Mom's original recipe one Sunday; and since we didn't have anything much planned that day, decided to make Avial to go along with it - one of hubby's favourite combinations.

Avial is a mixed vegetable stew which is common to both Tamil Nadu and Kerala, though if you ask me, it originated in Kerala and then seeped into Tamil Nadu via Palakkad....

The Kerala version is much drier than the Tamil version and I have also seen versions where the curd is added just before serving it, so that it doesn't sour the dish.

I tend to make this dish according to the menu involved - if it's part of a main meal, then I cook it drier and with the veggies chopped bigger. If it's more of a gravy accompaniment (like with adai) then I make it with more liquid and also with the veggies a bit smaller.

The vegetables itself are a matter of debate.....I remember both MIL and my mother insisting that one shouldn't use "English vegetables" and stick to "naatu" (local or desi) vegetables as far as possible.
So, for me that means no cauliflower and peas. Bhindi or okra as well as bittergourd are definitely a no-no due to their texture and taste. Some people also avoid colocasia (arvi) but I like a few pieces. I usually like to add drumstick, raw bananas, elephant yam,carrots (I know , I know English veggie - but I like the colour it adds to the dish!) and ash gourd (pushnikai).

But go with what you like....after all its the combination of different veggies with the coconut and yoghurt which gives its delicious taste.

Adai in itself is a protein packed dish with a healthy combination of rice and lentils. This when combined with the mixed vegetables in a coconut and yoghurt curry makes it a complete meal and gives a great start to the day.
(The traditional blob of home made butter is best kept for children who will burn it off!)

I am sending this combo to Weekend Breakfast Blogging which is the brainchild of Nandita of Saffron Trail. It's being hosted this month by Suganya of Tasty Palettes and the theme this month is Healthy Eats. "Meals that are balanced and include various different food groups like fruits, vegetables, whole grains, low-fat dairy products, etc are welcome", she says.


1. Soak the rice and dals in water overnight or for 4-5 hours.
2. Drain the water and grind along with the red chillies, peppercorns and cumin to a coarse paste, without adding too much water.The batter will be thick with pieces of dal not fully ground. This gives crisper adais.
3. To the batter add grated coconut, curry leaves, hing and salt. Add the chopped onions to the batter just before making the adais.
4. Heat a non stick griddle or a dosa tava and pour one ladle of the batter; spread gently into a medium circle which will be a bit thick. Make a small hole in the centre so that it cooks evenly.
5. Drizzle half a tsp of oil all around the adai and cook on a medium high flame for about 3-4 minutes, once it becomes golden brown on the bottom flip it over and cook the other side for another 2-3. minutes.
6. Serve hot with avial or jaggery on the side. 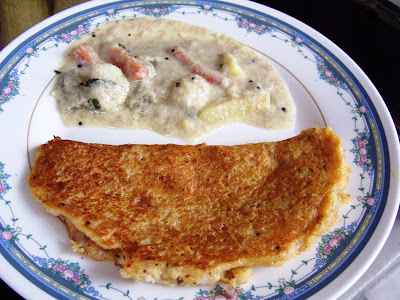 Grind the above into a paste and mix with half a cup of thick yoghurt which has been beaten with a spoon.

1. Pressure cook the vegetables with about half a cup of water and a little salt, for just one whistle (5 minutes) so that it is cooked but not mushy.
2. Add the coconut yohurt paste and curry leaves to the cooked vegetables and gently heat the mixture and simmer for about 5 minutes till the chillies lose their rawness. Adjust the salt and turn the flame off.
3. Drizzle the coconut oil over the stew and serve hot with adais.
Posted by Miri at 4:16 AM

What a great combo and I agree that they are healthful too!:))

Wonderful! I love adai. and I am thinking of posting adai too for the healthy WBB event. Thanks for sharing your version. Will try some time...

We ate a lot of this growing up. I *love* the smell of the adai as it is getting cooked :)

That is a great entry Miri. I simply love adai and aviyal. Looks so good!

Adai looks so crispy! I'm definitely going to give this one a go!

Just today we were discussing about serving adai for breakfast. With all the lentils, it is such a power booster. Thanks for the participation, Miri.

Kaykat, I never liked adai growing up and took me a long time to try it and enjoy...

You're welcome Suganya, the theme was very inviting!

Srivalli, havent tried coconut chutney with adai...never occured to me - such a creature of habit sometimes..

avial in the morning? never tried that :) neither have i tried it with adai.. seems like a fun combo!

Great combo Miri. and as u said healthy too! Nice entries.

wow, you are quick Miri! I justchecked Sug's post about WBB today, and you already have an entry:)

avail , i like it next to dosa :) .
nice entry for healthy breakfast .
thanks for sharing Miri.

Miri, both the adai and the aviyal look fabulous. I'd never thought of serving the two together, but I can now see they would complement each other perfectly. Thanks.

Nags, aviyal with its creamy coconutty consistency and yoghurt in it is nice in the morning, no garam masala etc...

One of those lucky coincidences Mansi - else I'd be thinking about it till the last date (like what happened last month) - I am so not good at cooking on demand!

Thanks Siri, Pooja and Vaishali!

Hey there dont know if i thanked u for this recipe ....anyway will get down to making it & sure it will become yummy!!!
Love Gia

Thanks Gia - do let me know how it turns out!