Shallot and Garlic, Olives and Sesame Focaccia and a Blogger meeting 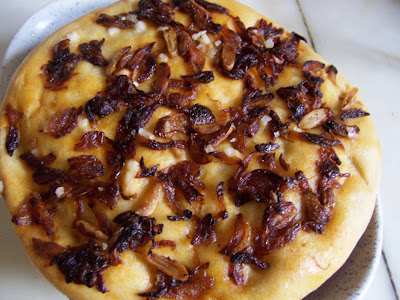 One makes the most unexpected connections while blogging - kindred spirits bond over stories of food events and falafel, cakes and bakes and the all consuming nature of food blogging. One such connection I made was with Deeba of Passionate about Baking - that delightful blog with the most mouth watering and scrumptious looking baked stuff - this beautiful chocolate strawberry combination even won a prize on the Serendipity Bake off!

So we exchanged notes and e-mails, Deeba made me part of the Arusuvai chain and we often talked of meeting up since we were in the same city (well not technically but atleast geographically!). And last week I actually did go over and meet her in her beautiful home - we chatted and laughed and then chatted some more between eating (read devouring!) a lovely chocolate cake and some chips with this amazingly creamy dip!! Thanks Deeba - it was wonderful meeting you and I hope we can do this again!

While over there, I told her I wanted to try out the focaccia bread she had made sometime back - in fact wanted to bake it for a party my neighbour was having that weekend. Tips and suggestions were noted and I set out baking this one day before (in case of any mishaps!). I also referred to this post by Susan of Farmgirl Fare which was based on Stephen's recipe for Quick Rosemary Focaccia. 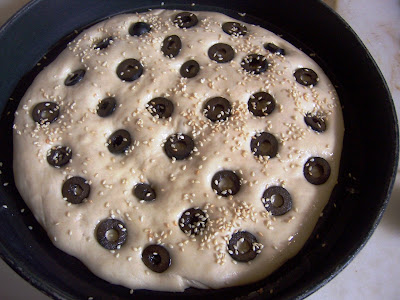 These breads were meant to be served as finger food with three dips so I made them a bit crisp, the first time baking them at a higher temperature than the second time.

The braid came out beautifully and I spent a good deal of time admiring my handiwork....sigh "pride comes before a fall" my mother used to say....I made the cardinal mistake of trying to transfer it to another baking pan before putting it into the oven and it was a mess by the end :( Lesson well learnt. 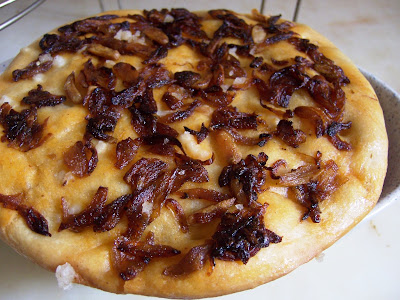 1. The shallot garlic topping I made by sauteeing one cup of sliced shallots along with 5-6 slice garlic flakes in olive oil and adding a dash of chilli powder and a pinch of cumin powder to it. Cool and spread evenly over the focaccia just before baking it. 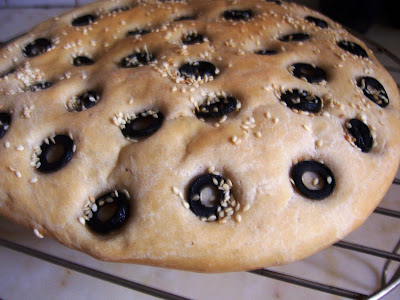 2. For the other breads, I simply put in one slice of olive into each dimple and then sprinkled toasted sesame seeds.

Changes I will make next time:

1. Don't spread the dough as much as I did this time and bake it for a lesser time.

2. Shape the bread on the baking tray it is to be baked in!

The party by the way rocked - my friend A and her husband upstairs did a marvellous job hosting the 'do and it went on into the wee hours - long time since I have been up that late other than for nursing my daughter when she isn't well!!

Here is part of the spread with another of the cooks (she made the melt-in-your-mouth kababs, delicious brownies and two of the dips) 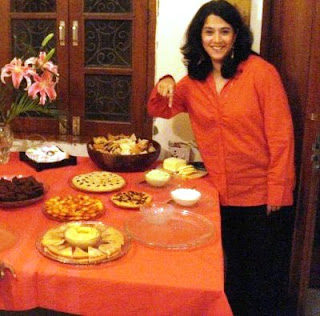 Mini idlis smeared with molagapodi, two types of focaccia, a cream cheese dip, a paneer and capsicum dip and a mayo,corn and tomato dip, pita bread with hummus (recipe to follow) and chocolate brownie pieces.
Posted by Miri at 10:59 AM

Love the foccaccia , it looks so good.
I like the one with the shallots.
Hey love the colourull cook also :-)

You have a nice blog here. You look for Hemali on Orkut. Just visit Indian Women in Singapore community on Orkut to see her. She is also a moderator of the community. Have a good day ahead!

Hey Miri...thanks for the lovely post & the mention of 'mua'!Am glad you came over; I had a great time too It happened all thanks to you & your effort. The bread looks lovely; hats off for making so many. Mum's are somehow always right...our 'mum' days will be proven someday too!!The spread looks lovely;you sure had a load of fun!! Thanks again...& make sure to come by again & again! Was GREAT to have you over. LOL

I know yeast works. It just doesn't work for me :(

Two disasters, and I am now positively scared to trying to bake with yeast.

Wow!! That sounds like one awesome party! Focaccia looks yummy!

Wow this looks great. Waiting for rest of the recipes.

hope u guys had fun:)))this one looks so yummm

wow, the focaccia looks perfect. I have eaten it but never tried.

Miri, the focaccia looks lovely, and it's nice you got a chance to meet a fellow blogger.

I'm totally digging your shallot/garlic focaccia! How nice that you got to meet a fellow-blogger!

looks gorgeous..I love the toppings over the bread..

looks delicious!! It must be fun meeting Deeba.

Simran, just try with a different brand of yeast. And if the yeast doesn't foam up and come up after 15 minutes discard it...Don't give up just as yet!

Was great to see you too Deeba - my pleasure! :)

You met up with Deeba?! That's lovely. It is indeed great making these connections and new friends.

The focaccias are outstanding.

Wow! Wow! Wow! it looks so delicious. Can't wait to bake it.

That looks yummy...nice you enjoyed doing it...and yes meeting a fellow blogger is so wonderful...good you met deeba...I am always so j seeing her wonderful and sinful looking cakes...:D..

and now who is that pretty lady standing next to the table...your sister..:D

is taht u in that pic miri? gorgeous lady with equally gorgeous bread:)

Wow! it is so nice to meet fello bloggers!
That Focaccia looks perfect!

WOw, isnt that fantastic when you connect with a fellow blogger as thought you've known them since ages...I always keep lamenting about the fact that there aint no Bombay bloggers for me to connect offline with!
Love both your foccasias :_

wow, that looks awesome Miri!! and looks like you had great fun with the spread there!:)

Thanks everyone for your lovely comments! and NO that's not me in the pic - that's a friend who made some of the stuff in the pic including some delicious brownies!