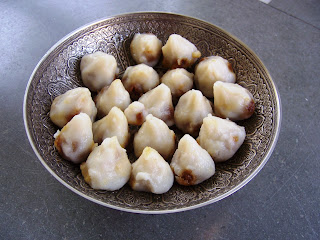 Growing up in Mumbai, I think there are few people who remain untouched by the singular devotion to Lord Ganesha - on display for a full 10 days with serpentine queues in front of the bigger "mandals" which compete to have the biggest idols. While the "sarvanjanik" part of the mandals have become very commercialised over the years, the fondness with which the smallest of idols are brought into homes and decorated and worshipped, has remained unchanged.

I remember this part and also the fun part which was a huge part of my childhood - the 10 day "culturals" our colony hosted. Dance, drama, music, fancy dress, film screenings, rangoli competitions - it was an amazing 10 days we looked forward the whole year. Some of the teenagers who used to put up a Marathi play (complete with three acts!) every year are now full fledged theatre actors and I am proud to have seen them first!

What has changed now is that I cringe at the sight of those huge idols going in procession for the immersion ritual and think of the polluted sea water at the end of it. There are many people who now buy only clay idols and shun the plaster of paris one with toxic colours, but unfortunately not too many of them as yet to really make a difference.

The Ganesh festival isn't very big in Delhi and I had to go into work since it wasn't a public holiday. Which meant that I had to finish the pooja by 9! Kozhukattais - which are steamed rice flour dumplings with a coconut-jaggery filling - are a traditional offering for this festival in Tamil Nadu. The Maharashtrian version is called "ukadiche modak". I also made "kunnuku" - deep fried fritters made from mixed lentils. Then there was idli, sambar and chutney - a filling breakfast and I'm sure Ganesha was as satisfied as we were :) Ganpati Bappa Morya! 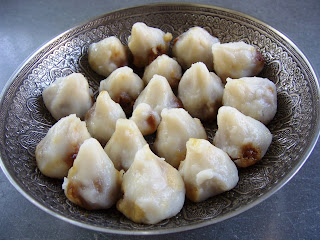 1. Heat the jaggery in a heavy bottomed pan with 2 -3 tbsp of water and heat till it dissolves. Add the grated coconut and cook till it becomes a thick mixture but not completely dry (about 5 minutes). Add the cardamom powder and switch off the flame. Transfer to another bow and cool.
2. Heat the water in a heavy bottomed pan and add a pinch of salt and a few drops of oil. When it is just about simmering, add the rice flour a little at a time, constantly stirring to avoid lumps.
3. Keep some extra rice flour and hot water on hand to add to the pan in case either is needed. The consistency should be like that of a smooth dough which can be kneaded.
4. Allow it to cool a bit but not completely. As soon as you can handle it, break of bits of the dough, roll into a ball. Smear some oil on your hands, flatten the ball in the palm of your hands and with your thumb and index finger make a shallow cup. Fill it with a small ball of the coconut jaggery mixture and seal it into a conical shape. Break off any excess dough at the top and reshape into a cone. You can also use moulds available in the market.
5. The trick is not to have too much dough so that the dumpling becomes very thick but not so thin either that the filling oozes out. Keep some oil in a cup to dip your fingers so the flour doesn't stick. Reheat the filling if it hardens.
6. When all the dough and filling is used up, grease an idli plate or a steamer, arrange the kozhukattais on it and steam for just 5 minutes.

This goes to the Sweet Series - Deep Fried or Steam Cooked Sweets , being hosted by Paajaka Recipes.

loved reading ur write-up and i agree with most the things u have mentioned. its pity to see so much of toxic paint used in ganesha idols and we r talking of thousands of these idols being submerged every yr. hopefully people will realise and start using simple clay ones.
and i love modak and had it for ganesh festival.

I always want to try this kozhukattai with coco and jagerry somehow it didn't venture this one.
Delicious Kozhukattai!

How lovely these look, Miri. I know exactly what you mean about the Ganesh festival in Bombay: it was pretty special. I do miss those days.

Peppermill, missed making them on Vinayaka Chathurthi. Looks great. Miss the festive spirit which makes it easy to miss the day and then realize it has passed by.

Indo - you are right, I have asked my MIL to remind me some festivals (the ones which don't merit national holidays like Karthigai Deepam and maha shivarathri)which I would love to celebrate but can forget so easily....

Vaishali and Sia - its one of the many things I miss about Mumbai...Thanks!

Thanks Rajani and Cham!